Browse ..
A-Z
By Date
By Year
By State
By Country 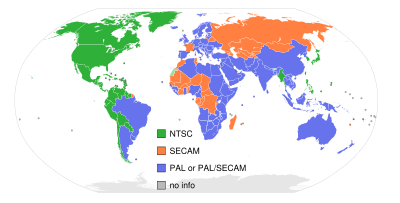 PAL, short for Phase Alternating Line, is the analogue video format used in television transmission in most of Europe (except France, Bulgaria, Russia, Yugoslavia, and some other countries in Eastern Europe, where SECAM is used), Australia and some Asian, African, and South American countries. PAL was developed in Germany by Walter Bruch, and first introduced in 1967.

The name "Phase Alternating Line" describes the way that part of the colour information on the video signal is reversed in phase with each line, which automatically corrects phase errors in the transmission of the signal. NTSC receivers have a tint or hue control to perform the correction manually. Some engineers jokingly expand NTSC to "Never The Same Colour" while referring to PAL as "Perfect At Last" or "Peace At Last"! However, the alternation of colour information - Hanover bars - can lead to picture grain on pictures with extreme phase errors.

The PAL colour system is usually used with a video format that has 625 lines per frame and a refresh rate of 25 frames per second. Like NTSC this is an interlaced format. Each frame consists of two fields (half-a-frame), each field has half of the lines of a frame (one has all the even lines, one has all the odd lines). Fields are transmitted and displayed successively. There are 50 fields per second. At the time of its design, the interlacing of fields was a compromise between flicker and bandwidth.

There are many variants of PAL. PAL-M is a hybrid of NTSC and PAL with 525 lines/60 Hz used in Brazil and PAL-N is a variant of PAL with narrow bandwidth which is used in Argentina, Paraguay, and Uruguay. PAL-I is the version used in the United Kingdom. Other European countries use PAL-B/G. A variant named PAL60 uses, like NTSC, 59.94 fields per second. It is used mainly for displaying NTSC video or DVD on a PAL TV set.

The National Television Standards Committee sets the analog television standard for the United States; this format itself is also informally called "NTSC". While a standard for the United States, it has been adopted in other countries as well, for example Japan. The current version replaced an older NTSC standard by adding chrominance information on a 3.579545 (exactly 315/88) MHz subcarrier, retaining compatibility with older black-and-white NTSC television receivers.

The NTSC format consists of 29.97 interlaced frames of video a second, each consisting of 480 lines of vertical resolution out of a total of 525 (the rest are used for sync, vertical retrace, and other data such as captioning). NTSC interlaces its scanlines, drawing odd-numbered scanlines in odd-numbered fields and even-numbered scanlines in even-numbered fields, which gives a nearly flicker-free image at approximately 59.94 hertz (nominally 60 Hz / 1.001) refresh frequency, which is close to the nominal 60 Hz alternating current power used in the United States. (Compare this to the 50 Hz refresh rate of the 625-line PAL video format used in Europe, where 50 Hz (25 hertz is resonant) AC is the standard; PAL has noticeably more flicker than NTSC.) Synchronization of the refresh rate to the power cycle helped film cameras record early live television broadcasts, as it was very simple to sync a film projector to capture a frame of video to a film cell using the frequency of the alternating current. Also, it was preferable to match the screen refresh rate to the power source so as to avoid wave interference that would produce rolling bars on the screen.

For color, NTSC includes a chrominance subcarrier, whose frequency is not a multiple of the horizontal scan frequency and therefore must be kept synchronized by transmitting a colorburst signal on the front porch (an otherwise unused period after the horizontal sync pulse and before the line of video starts). The colorburst consists of 8-10 cycles of the unmodulated subcarrier.

The mismatch in frame rate between NTSC and the other two video formats is the most difficult part of conversion between the two. Because the frame rate is different, it is necessary for video conversion equipment to guess the contents of intermediate frames which introduces artifacts, and a trained eye can quickly spot video which has been converted between formats.

An NTSC television channel as transmitted occupies a total bandwidth of 6 MHz. A guard band, which does not carry any signals, occupies the lowest 250 kHz of the channel, to avoid any known possibility of interference between the video signal of one channel and the audio signals of the next channel down. The actual video signal, which is amplitude-modulated, is transmitted between 500 kHz and 5.45 MHz above the lower bound of the channel. The video carrier is 1.25 MHz above the lower bound of the channel. Like any modulated signal, the video carrier generates two sidebands, one above the carrier and one below. The sidebands are each 4.2 MHz wide. The entire upper sideband is transmitted, but only 750 kHz of the lower sideband, known as a vestigial sideband, is transmitted. The colour subcarrier, as indicated above, is 3.579545 MHz above the video carrier, and is quadrature-amplitude-modulated. The highest 250 kHz of each channel contains the audio signal, which is frequency-modulated, making it compatible with the audio signals broadcast by FM radio stations in the 88-108 MHz band. The main audio carrier is 4.5 MHz above the video carrier. Sometimes, a channel can contain an MTS signal, which is simply more than one audio signal. This is normally the case when stereo audio and/or SAP signals are used.

Video professionals and television engineers do not hold NTSC video in high regard, joking that the abbreviation stands for "Never The Same Color" or "Never Tested Since Christ". For one, the interlaced picture (drawing every other horizontal line of video in one pass, and filling in the others in the second) complicates editing video. Additionally, radio interference tends to degrade an NTSC picture, so the picture often loses its color balance by the time the viewer receives it (this necessitates the inclusion of a "tone" or "hue" control on NTSC sets, which is not necessary on PAL or SECAM systems). And finally, some complain that the 525 line resolution of NTSC results in a lower quality image than the hardware is capable of.

SECAM (Sequentiel Couleur avec MÃ©moire, French for "sequential color with memory") is an analog television system, using frequency modulation to encode chrominance information. It is so named because it uses memory to store lines of color information, in order to eliminate the color artifacts found on systems using the NTSC standard.

It was developed for the same purpose as PAL, but uses a different (and many would argue inferior) mechanism to do so. R-Y and B-Y information is transmitted in alternate lines, and a video line store is used to combine the signals together. This means that the vertical colour resolution is halved relative to PAL and NTSC.

SECAM was introduced in France in 1967, where it is still used; it has also been adopted in many former French colonies, as well as parts of Eastern Europe (Bulgaria, Hungary) and the former Soviet Union. Many have argued that the primary motivation for the development of SECAM in France was to protect French television equipment manufacturers and make it more difficult to view non-French programming. Political factors from the Cold War have also been attributed to the adoption of SECAM in Eastern Europe, as its use made it impossible for most Eastern Europeans to view television which was broadcast from outside the Iron Curtain which were mostly using PAL.

There are three varieties of SECAM:

American engineers have been known to claim that SECAM stood for "System Essentially Contrary to the American Method".

Unlike PAL or NTSC, analog SECAM television could not easily be edited in its native form: instead, post-production was done in PAL, and the result then trans-coded into SECAM at the point of transmission.