Browse ..
A-Z
By Date
By Year
By State
By Country

Blu-ray Disc (also known as Blu-ray or BD) is the successor of the DVD disc.

Blu-Ray is an optical disc storage media format. Its main uses are high-definition video and data storage. The disc has the same dimensions as a standard DVD or CD.

The name Blu-ray Disc is derived from the blue-violet laser used to read and write this type of disc. Because of its shorter wavelength (405 nm), substantially more data can be stored on a Blu-ray Disc than on the DVD format, which uses a red (650 nm) laser. A dual layer Blu-ray Disc can store 50 GB, almost six times the capacity of a dual layer DVD.

Blu-ray Disc was developed by the Blu-ray Disc Association, a group of companies representing consumer electronics, computer hardware, and motion picture production. The standard is covered by several patents belonging to different companies. As of March 2007, a joint licensing agreement for all the relevant patents had not yet been finalized.

As of February 2008 hundreds of Blu-ray Disc titles have been released in the United States, and over 250 in Japan. 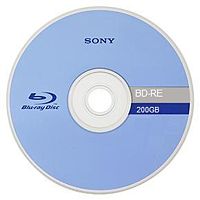 In 1998, commercial HDTV sets began to appear in the consumer market; however, there was no good, cheap way to record or play HD content. Indeed, there was no medium that could store that amount of data, except JVC's Digital VHS and Sony's HDCAM. Nevertheless, it was well known that using lasers with shorter wavelengths would enable optical storage with higher density. When Shuji Nakamura invented practical blue laser diodes, it was a sensation, although a lengthy patent lawsuit delayed commercial introduction.

The first DVR Blue prototypes were unveiled at the CEATEC exhibition in October 2000. Because the Blu-ray Disc standard places the data recording layer close to the surface of the disc, early discs were susceptible to contamination and scratches and had to be enclosed in plastic cartridges for protection. In February 2002, the project was officially announced as Blu-ray, and the Blu-ray Disc Association was founded by the nine initial members.

The first consumer devices were in stores on April 10, 2003. This device was the Sony BDZ-S77; a BD-RE recorder that was made available only in Japan. The recommended price was US$3800; however, there was no standard for pre-recorded video and no movies were released for this player. The Blu-ray Disc standard was still years away, since a new and secure DRM system was needed before Hollywood studios would accept it, not wanting to repeat the failure of the Content Scramble System for DVDs.

The Blu-ray Disc physical specifications were finished in 2004. In January 2005, TDK announced that they had developed a hard coating polymer for Blu-ray Discs. The cartridges, no longer necessary, were scrapped. The BD-ROM specifications were finalized in early 2006. AACS LA, a consortium founded in 2004, had been developing the DRM platform that could be used to securely distribute movies to consumers. However, the final AACS standard was delayed, and then delayed again when an important member of the Blu-ray Disc group voiced concerns. At the request of the initial hardware manufacturers, including Toshiba, Pioneer and Samsung, an interim standard was published which did not include some features, like managed copy

The first BD-ROM players were shipped in the middle of June 2006, though HD DVD players beat them in the race to the market by a few months.

The first mass-market Blu-ray Disc rewritable drive for the PC was the BWU-100A, released by Sony on July 18, 2006. It recorded both single and dual layer BD-R as well as BD-RE discs and had a suggested retail price of US$699.

At war with HD-DVD

The DVD Forum (which was chaired by Toshiba) was deeply split over whether to go with the more expensive blue lasers or not. In March 2002, the forum voted to approve a proposal endorsed by Warner Bros. and other motion picture studios that involved compressing HD content onto dual-layer DVD-9 discs. In spite of this decision, however, the DVD Forum's Steering Committee announced in April that it was pursuing its own blue-laser high-definition solution. In August, Toshiba and NEC announced their competing standard Advanced Optical Disc. It was finally adopted by the DVD Forum and renamed HD DVD the next year, after being voted down twice by Blu-ray Disc Association members, prompting the U.S. Department of Justice to make preliminary investigations into the situation.

HD DVD had a head start in the high definition video market and Blu-ray Disc sales were slow at first. The first Blu-ray Disc player was perceived as expensive and buggy, and there were few titles available. This changed when PlayStation 3 launched, since every PS3 unit also functioned as a Blu-ray Disc player. By January 2007, Blu-ray discs had outsold HD DVDs, and during the first three quarters of 2007, BD outsold HD DVDs by about two to one.

Some analysts believe that Sony's PlayStation 3 video game console played an important role in the format war, believing it acted as a catalyst for Blu-ray Disc, as the PlayStation 3 used a Blu-ray Disc drive as its primary information storage medium. They also credited Sony's more thorough and influential marketing campaign. More recently several studios have cited Blu-ray Disc's adoption of the BD+ anti-copying system as the reason they supported Blu-ray Disc over HD DVD.

In January 2008, a day before CES 2008, Warner Brothers, the only major studio still releasing movies in both HD DVD and Blu-ray Disc format, announced it will release only in Blu-ray Disc after May 2008. This effectively included other studios which came under the Warner umbrella, such as New Line Cinema and HBO, though in Europe HBO distribution partner the BBC announced it would, while keeping an eye on market forces, continue to release product on both formats. This led to a chain reaction in the industry, including major US retailers such as Wal-Mart dropping HD DVD in their stores. A major European retailer, Woolworths, dropped HD DVD from its inventory. Netflix, the major online DVD rental site, said it would no longer stock new HD DVDs. Following these new developments, on 19 February 2008, Toshiba announced it would be ending production of HD DVD devices, allowing Blu-ray Disc to become the industry standard for high-density optical disks. Universal Studios, the sole major movie studio to back HD DVD since inception, shortly after Toshiba's announcement, said "while Universal values the close partnership we have shared with Toshiba, it is time to turn our focus to releasing new and catalog titles on Blu-ray Disc." Paramount Studios, which started releasing movies only in HD DVD format during late 2007, also said it would start releasing in Blu-ray Disc. With this, all major Hollywood studios now support Blu-ray.

Blu-ray Discs may be encoded with a region code, intended to restrict the area of the world in which they can be played, similar in principle to the DVD region codes, although the used geographical regions differ. Blu-ray Disc players sold in a certain region may only play discs encoded for that region. The purpose of this system is to allow motion picture studios to control the various aspects of a release (including content, date, and, in particular, price) according to the region. Discs may also be produced without region coding, so they can be played on all devices.

This arrangement places the countries of the major Blu-ray manufacturers (Japan, Korea, Malaysia) in the same region as the U.S., thus ensuring early releases of U.S. content to those markets. As of early 2008, about two-thirds of all released discs were region-free.

Blu-ray Disc uses a "blue" (technically violet) laser operating at a wavelength of 405 nm to read and write data. Conventional DVDs and CDs use red and near infrared lasers at 650 nm and 780 nm respectively.

The blue-violet laser's shorter wavelength makes it possible to store more information on a 12 cm CD/DVD sized disc. The minimum "spot size" on which a laser can be focused is limited by diffraction, and depends on the wavelength of the light and the numerical aperture of the lens used to focus it. By decreasing the wavelength, increasing the numerical aperture from 0.60 to 0.85 and making the cover layer thinner to avoid unwanted optical effects, the laser beam can be focused to a smaller spot. This allows more information to be stored in the same area. In addition to the optical improvements, Blu-ray Discs feature improvements in data encoding that further increase the capacity. (See Compact disc for information on optical discs' physical structure.)

Because the Blu-ray Disc data layer is closer to the surface of the disc, compared to the DVD standard, it was at first more vulnerable to scratches. The first discs were housed in cartridges for protection. Advances in polymer technology eventually made the cartridges unnecessary.

TDK was the first company to develop a working scratch protection coating for Blu-ray Discs. It was named Durabis. In addition, both Sony and Panasonic's replication methods include proprietary hard-coat technologies. Sony's rewritable media are sprayed with a scratch-resistant and antistatic coating. Verbatim's recordable and rewritable Blu-ray Disc discs use their own proprietary hard-coat technology called ScratchGuard.